Thank you! Your submission has been received!
Oops! Something went wrong while submitting the form.
About Us
Newsroom
For Customers Chorus Kitchen Work with Us Customer Feedback Contact Us Donate Now
Tel 1800 264 268

Chorus CEO Dan Minchin’s monthly reflection on how we are putting the community back into community service.

In this month’s blog, I’m going to ruminate on leadership.

Before you roll your eyes, my intent is not to add to the mountain of writing on leadership caricatures. This is not about heroic, self-obsessed leadership by people in positions of authority.

Instead, I want to talk about leadership that comes from everywhere.

In recent times, I have been inspired by leadership from all over Chorus. 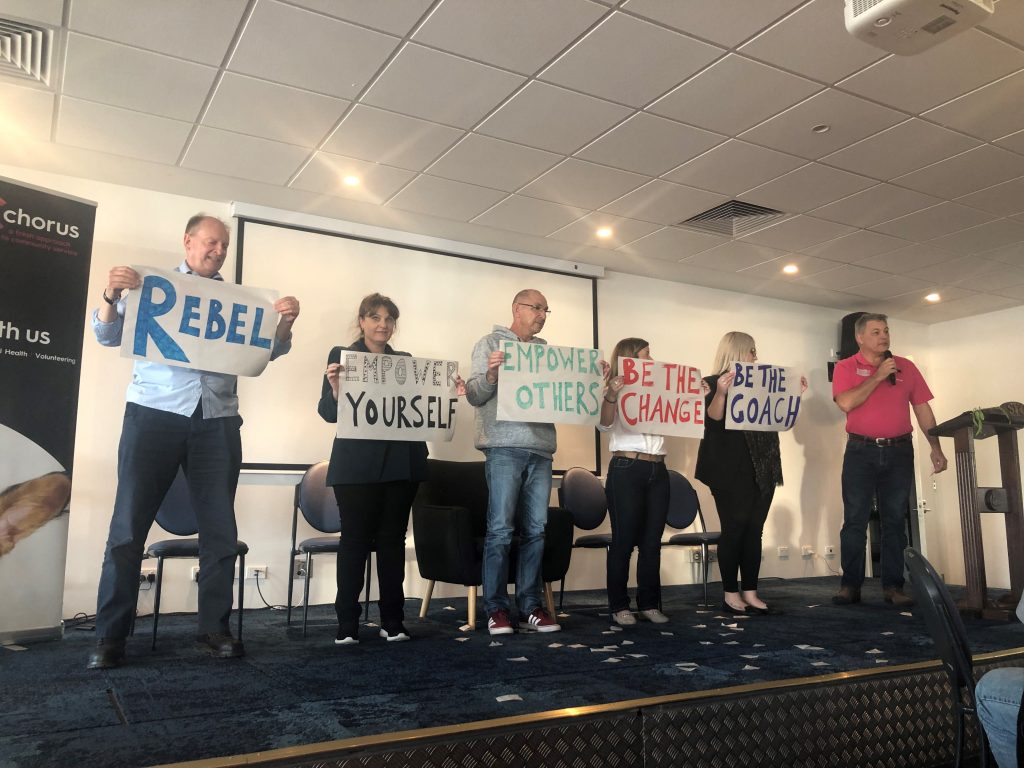 Ronald Heifetz defined “adaptive” leadership as the work required when new situations challenge a group’s long-held attitudes, behaviours and beliefs. Because of the profound personal shift required, and the ambiguity of such situations, leadership is most effective when it engages others in identifying challenges and finding a way forward, rather than giving directions.

Not only does this kind of leadership not necessarily come from people in authority, it may in fact be more powerful when it doesn’t. The traditional, authoritative leader (“manager”) -follower dynamic is built on the faulty assumption that a leader is all-knowing and a follower is a passive instrument. Such programming makes it impossible for either party to adapt to circumstances, take personal responsibility or undergo the necessary personal growth.

This kind of leadership is particularly relevant to us, as we are at a pivotal point in a journey which – somewhat by accident, though there is a bit of design too – reimagines Chorus as
an organisation led by and for all.

1. Chorus 1.0. Since merging, we have attempted to build a culture in which frank conversations are common, hierarchy and permission-seeking are dialled down, and relationships are strong. This has been less about making Chorus a nice place to work, and more about becoming more effective; the Chorus workforce is widely-spread and interacts daily with thousands of people with all their variability, brilliance and flaws. As just one example, we work more safely when people are mindful, speak up, are heard, and take responsibility.

2. Chorus 2.0. Over my previous seven blogs, I have written about the future we are creating. The impending “major upgrade” of Chorus is all about becoming simple, local and effective; about reducing hierarchy and creating a network of small teams which are empowered to forge deeper relationships with customers, each other and communities. We believe this will make us a happier and better organisation, creating bigger impact, delivering better services and a sustaining a more resilient business. It is a distributed way of working which should unleash lots of potential, but will depend on leadership coming from everywhere.

3. Transition from 1.0 to 2.0. We are in transition right now, and never has leadership from everywhere more been more important. Traditional “management” work is being gradually unwound, and people asked to become more customer-oriented, and to coach and enable others. This is a big change, one which would reprogram historical habits to increase personal responsibility, achievement and collaboration. We are inviting Chorus people to design and contribute to this daunting and exciting change, rather than be recipients of it. In turn, the path forward and what it means for individuals is not always clear. In this period of uncertainty, leadership needs to come from everywhere.

As part of the transition program, we recently determined that in February we will trial our first three “Locals” (teams or “mini-business units” of around 50 staff and volunteers, supporting 200-500 customers) in the Peel district of southern Perth. Through a process of selection, nomination and voting, three Local leaders were identified and have started engaging others in designing and planning away forward.

The Local leader role itself is not well-defined and will evolve over time. The three Local leaders – Angela, Lisa and Craig – do not come from senior management, but from a variety of customer facing roles. Rather, they have established a personal motivation aligned with the Local philosophy. They have exhibited courage and leadership to be a pioneer. And they have already – within a matter of weeks – started to bring people together and to generate momentum and support.

Leadership in any form should start with clarity of shared intent. It then must create space, a process, and belief for the intent to be achieved. And it provides support for individuals and groups so they can contribute to achieving the intent.

Leadership from anywhere is an extremely powerful way of making these things happen, particularly in Chorus right now. I think its power doesn’t come despite the absence of formal authority, but because of it.